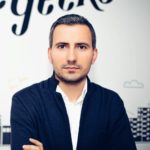 Costin has been working in the communication industry for 15 years, mixing his experience as a communication specialist, with that of running a business. In 2010, Costin co-founded and led The Geeks, a digital agency which soon became one of the strongest digital agency brands in Romania, acting both as Managing Partner, and Head of the Creative Department. Starting 2016, Costin became the Managing Director of Saatchi & Saatchi + The Geeks, after The Geeks has merged in Publicis One. After 7 years with The Geeks, in April 2017, Costin started in his new role as a communication consultant.

For his activity, in 2010 and in 2012, Costin received two Excellence Awards from the International Advertising Association (IAA Romania). He also won numerous digital, efficiency and creative awards.

Costin has a bachelor degree in communication and public relations. He also studied advertising at a master’s level, and digital marketing at The Institute of Direct Marketing, London. Moreover, Costin is also an Associate Professor at The Faculty of Communication and Public Relations in Bucharest, running a digital communication course, at the university’s master program.

Costin is also one of the founding members of the local branch of the international association of account planners, The Account Planning Group (APG), and has been involved in numerous training activities for the Romanian advertising industry. In addition, Costin is a keynote speaker at many marketing & communication events, being also part of the jury at all the major communication festivals in Romania.