We are pleased to announce the Jury members for the MIXX Awards Europe 2019, who will be judging the talented digital advertising campaigns that are entered into the MIXX Awards, before the extended deadline of Friday 22 March.

Anna Lubowska, an independent business consultant, supervisory boards member, will Chair the Jury and will be joined by Anna Gruszka, Chief Digital Officer at IPG Mediabrands; Stephanie Matthews, Campaign Manager for Virgin; Daniel Bischoff, Chief Marketing & Operations Officer at RTL; Ash Grant, Head of Biddable Media at Experian and Peter Drake, Executive Creative Director at Digitas. The profiles of the jury members can be found below.

The MIXX Awards Europe are an opportunity to gain industry recognition for your European campaigns and to educate the marketplace about what works and why in digital marketing, as well as inspire the industry by highlighting new ideas and future trends.

In 1992 entered the advertising world as a Media Director at BBDO. Next led the media department at JWT/Parintex. In 1998 became Managing Director of newly-formed The Media Edge, which, after the merger with CIA, went on to become Mediaedge:cia and MEC. Under her management, MEC Poland racketed up the rankings and significantly expanded its offer. In 2006 promoted to Chief Executive Officer, Central Eastern Europe and 4 years later to Chairman, CEE, Russia and CIS. In 2018 hold the position of CEO of GroupM Poland, the largest media investment group controlling nearly 40 perc. share in the market.

Since the beginning of 2019 Anna works as a freelance consultant.

Apart from her business duties she has always been active in the initiatives serving the whole advertising community i.e. in the role of the President of the Board of SAR Marketing Communication Association between 2009 – 2011 and as a jury member at various contests including Effie, Cannes, Media Trendy, Golden Hammer, Golden Drums, Cristal Awards and European MIXX Awards.

In  Media and Marketing January edition Anna was praised as one of 25 legends of Polish media, marketing and advertising industry .

Anna is responsible for managing the team of experts, developing digital structures and expanding the holding portfolio as a Chief Digital Officer of IPG Mediabrands Poland, CEO of the interactive agency Reprise, member of the management board of Universal McCann and MAGNA Poland and Supervisory Board of IAB Poland. Formerly Managing & Strategy Director of Codemedia and Digital Manager at HAVAS, where in 2008 she was responsible for the opening and training of digital agencies in CEE. For several years she has been persuading to skilfully use interactive media related to changing consumer habits. In January 2019 she was chosen as one of the Top Thinkers by Screenlovers service.

A graduate of the Warsaw University and Polish Academy of Sciences with a certificate of creating social expertises. With commitment educates the marketing industry as a speaker among others: IAB Forum, Mobile Trends, VideoWars, Internet Standard and Congress of Online Marketing. Anna was a president of the jury in Young Cannes Lions, MIXX Awards and Golden Arrow. She walks fast, speaks fast and makes decisions quickly. 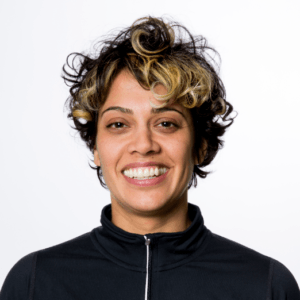 As Campaign Manager for Virgin, Stephanie brings the global masterbrand strategy to life through channel and brand activations. A strong masterbrand underpins the commercial success of the 60+ Virgin companies in the portfolio. Prior to this she was at ITV as Commercial Audiences Manager, supporting the broadcast and digital teams with advertiser insights, around shows including Love Island and Corrie. Here she led the award winning ITV Second Screen, an insight piece uncovering the motivations and commercial benefits behind companion programme app and TV viewing behaviours.

Her career has spanned both marketing communications and research within the UK and Australia, for a variety of industries including media at Channel 4 and News Corp, and travel, insurance and finance at the RAC.

Stephanie supports equality for all in the workplace, and is an active member of a number of industry organisations including President at women’s network Bloom UK, Stonewall’s School Role Model programme and the Media Trust mentoring programme. She’s a recent 2018 winner of WACL’s Future Leader Award.

As Chief Marketing & Operations Officer, Daniel Bischoff oversees all relevant marketing and operations functions at RTL AdConnect, including strategy development, cross country total video research as well as pan-European digital and TV planning & implementation, development of scalable inventory products,  and identification of new business and all sales support. Prior to joining RTL AdConnect in 2016, Daniel was head of strategic Marketing at IP Deutschland after joining from a 4,5 year stay at MediaCom Germany where he held various positions, including Managing Partner.

Daniel Bischoff is 38 years old, married with three children. He studied Theater, Film and Media Sciences as well as Philosophy in Frankfurt, Brussels and Berlin.

Peter Drake is the Executive Creative Director of Digitas UK, leading Connected Communications for the agency, developing powerful and award-winning work for clients such as Kellogg’s, Honda and American Express.

Peter is also an expert in content and branding which stems from his previous BAFTA winning experience in broadcasting and content creation.

Peter is a relentless explorer of finding new ways to bring brands to life – his unique perspective combines exploring new tech and digital innovations with the craft of timeless storytelling,

Peter is regular judge for BAFTA Film, TV and Games awards, as well as Campaign Big Awards and the IAB MIXX Awards.

In his spare time, Ash enjoys art, travelling and is currently training for his first powerlifting competition.

Christina Keller leads the ‚Creative Shop’ for Facebook and Instagram across the Central European Region. Together with a team of art directors, copywriters and planners, she supports agencies and clients to come up with innovative and efficient mobile first ideas.

Christina studied Marketing Communication at the University of Arts in Berlin. She started her career at McCann Erickson – hoping to become a fabulous copywriter. Over time she discovered that her real vocation lies in strategic planning. She is passionate about digging for data and human insights and about translating this into inspiring campaigns, that really matter to people.

She worked as a strategic planner for Jung von Matt, TBWA, DDB over many years before changing on client side and initiating the employer branding campaign for Deutsche Bahn in 2012. She works for Facebook since August 2015 – and loves paper books, traveling, spending time with her Algerian godchild.

IAB Europe is looking for entries from talented and hard-working teams that have created some of the best digital advertising campaigns that are deserving of the European-recognised awards for its MIXX Awards Europe competition.

All winners will be announced at IAB Europe’s flagship conference, Interact 2019. Over 600 Industry leaders from across Europe’s digital advertising ecosystem, from advertisers to publishers, agencies to technology companies, are expected to attend the Interact 2019 event. This year the event is being held on 4-5 June in Warsaw, Poland. Tickets are now open for registration here.

Everything you need to know to enter Europe’s leading Digital Advertising and Research Awards!